It’s been so sunny and nice out here in Wallowa County even Mr. Sun is smiling.

We’re heading to the Lower Salmon River and the flow, last I checked, is in the mid-18-thousand range cfs, which makes The Slide Rapid exciting. 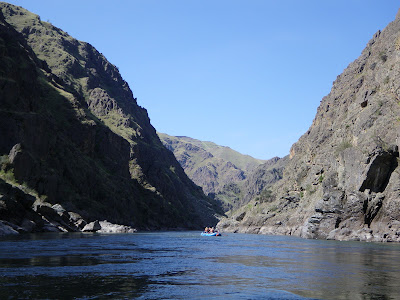 And here’s a look at The Slide itself. Less peaceful in certain conditions. 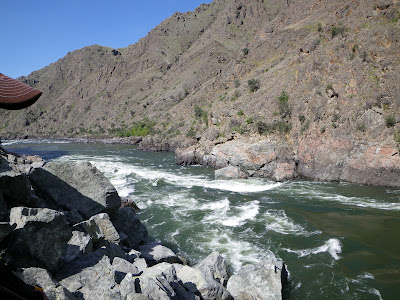 Here’s the deal. The Slide is formed by . . . a slide. A big rock slide. The picture above is taken while standing on one of the big boulders that let loose and tumbled down into the channel to pinch the river here. This view doesn’t really do it justice and it’s a little more involved than this long-distance perspective suggests.

When the river is high it squeezes things so much that this rapid can be something you don’t want to tangle with.

At low water, it’s nothing. Just a gentle bob over little waves.

We’ll be going through at kind of a transition phase, where you can get through fine, but it can be exciting with waves coming at you from left and right and you have to squeeze through.

Morgan and I went through there a few years back at a similar flow and it all worked out just fine with an exciting ride. But I did get a new experience when the confused water grabbed my oar and yanked the oarlock stand right off the frame. It’s that aluminum upright I’m working on re-attaching in this picture here. 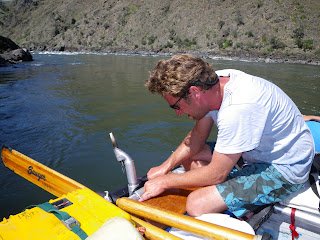 That’s some force, to pull a chunk of metal free from where it’s screwed into the sleeve. Here’s a tip to all you rowers out there: it’s good policy to keep your blades out of the water when in the midst of turbulence, to avoid the water grabbing your blade just like happened to me here. But in this case I had to do some maneuvering and tried for shallow moves with the oars. The Slide didn’t care if they were shallow or not, flexed its muscles, but by then we were through the main slot and it all worked out just peachy.

So some of the Winding Waters crew will be out on the river for the 4th. Here’s hoping you have a great Independence Day and I’ll leave you with a view from the moraine above Wallowa Lake last year during the Shake the Lake fireworks show.

If you haven’t seen the Wallowa Lake fireworks show, my favorite part is where the echo rebounds off the mountains with a delayed reaction rumble. It’s pretty impressive.

Have a good one. We’ll see you on the river.