Paul & Penny ventured outside the Wallowa County line. They are on a noble mission, off to behold an outdoor show where peddlers display their wares and only the finest will be chosen for the new river mercantile shoppe at the soon-to-be christened grand new Winding Waters home base located in the hamlet of Joseph.

Still, I find myself trepidatious on their behalf. The Arentsens are brave and true and know their way around this wide world, but to many folk here in the County, crossing to The Outside is a fearsome journey.

On local maps passed out by the Chamber of Commerce, land beyond our borders is simply labeled, “There Be Dragons.” 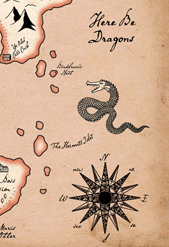 Also out there, beyond the County, there be stoplights. (Fairly-well-known-little-known fact: there are a total of no stoplights in Wallowa County.)

To illustrate the perils of oppressive traffic laws and other dangers in the outside world, I offer one of my favorite Wallowa County bits of lore – this encounter involves Chuck and Greg, two minstrel types who used to live out here. Quality folk, those guys. Greg had this old pickup, a powder blue 50s something GMC if I remember right.

It had the old-old style windshield wipers with a little motor mounted to the windshield frame. The motor had failed so they rigged up some baling twine to the wipers outside and ran the ends into the cab through the little wing windows. And that’s the kind of ingenuity that gets you pulled over.

For some reason they had taken this vehicle beyond the County line and were over in La Grande when the skies did open and the rain did poureth down.

So they’re whipsawing back and forth on the windshield wiper bridle they’d rigged up and a passing officer of the law noticed this unorthodox activity, hit the lights and stopped them for a chat.

The conversation did not seem to be going their way, but either when they were asked for ID or where they thought they were going, Wallowa County became known as their destination and the officer nodded as if it all made sense now and that explained the Clampett family wiper blades. They were urged to hurry back home and stay there. Or at least leave the truck there.

So you’ve got to be on your guard out there in the wide world, is what I’m saying.

And I’ve been nervous for Penny and Paul out there with all the stoplights and teeming masses and interstates and Thai food restaurants and things to see beyond the Wallowa Mountains . . . so it was a relief to see their facebook post, relieving my fears they might be in jail or a cult or, worse, a shopping mall.

But, no. They’re skiing. And there’s 18 inches of powder where they are. And something called a “chair lift,” which might be slang for a T-bar. I’ll have to Google that later. 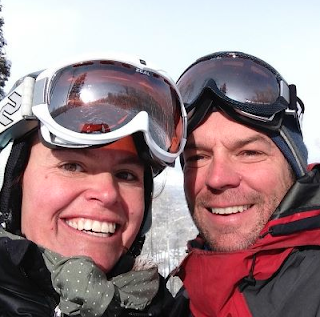 Travel safe you guys. And make sure your wiper blades work. Those coppers are all over that business if you try the baling twine fix.