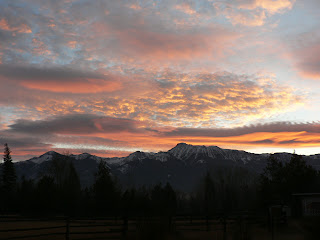 I’ve got sort-of good news relating to steelhead fishing in Wallowa Valley. And I’ve got some kind-of good news. Some downright positive news and some not-necesarily bad news, given that it is, after all, December.

What do you want first?

First, the downright positive: Fishing guide Tom continues to maintain his air of mystery about him, managing to get his fishers to catch fish when other mere mortals might not be landing steelhead. To witness this phenomenon for yourself, arrange an exhibition by scheduling a se’ance on the river with The Amazing Farnum at the Winding Waters Guided Steelhead Tent and Fortune Telling Booth.

In less exciting news, turns out I’m a mere mortal. I went by the Wallowa River a couple times last week and didn’t see any reason not to rig up and fish for a little bit. We haven’t been getting blockbuster reports from the Wallowa River — Tom’s been working his magic down lower on the Grande Ronde — but there must be fish up that high and I aimed to find one.

I may — and may is a long way from definitely did — hook a steelhead two days ago on the Wallowa. Felt right. Looked right during the brief glimpse I got underwater before it took the liberty of unhooking itself . . . looked on the small side, but it buoyed my hopes and they were already floating fairly high because the bite from non-steelhead was actually pretty active and for a day with a little bit of ice along the banks, getting into some trout and whitefish is a nice consolation prize.

The little bit of ice was just that, thin tinkles right on the fringe of the banks of the Grande Ronde. This picture here is of the Minam River, which is low and sporting some regular chunks of ice. Pretty, though. If you like that kind of thing. 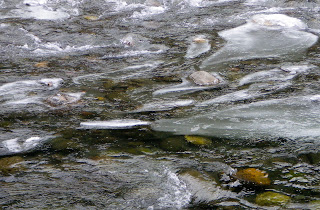 So the temperatures are down there, but the fish are in there and they’re still moving their jaws up and down to ingest things in the water that look like food. Nothing warms you up faster on a cold clear day than the tug of a steelhead peeling line. Except for hot tubs. Hot tubs might warm you up faster. But they’re not as exciting. Unless . . . never mind.

Still enjoying the bejeezis out of Thomas McGuane’s The Longest Silence. Here he’s talking about a small pool with a difficult approach:

The trouble was you had to stay far enough away from the pool that it was hard to keep your line off the tailwater, which otherwise produced instantaneous drag. You needed a seven-foot rod to make the cast and a twenty-foot rod to handle the slack. They hadn’t built this model yet; it would need to be a two-piece rod with a spring-loaded hinge driven by a cartridge in the handle, further equipped with a flash suppressor.

I’ve started tinkering in my shop to build a prototype, McGuane.

Announcing The Gearboat Chronicle What The? Photo Contest:

First person to identify the subject of this photo wins an exciting gift from the Gearboat Chronicles prize closet. This week it will either be the pair of Winding Waters Croakies I found in my glove compartment or a custom steelhead fly tied by Jon Rombach — or a fourth grader in arts and crafts class. Hard to say.
Hints: this photo was taken underwater at Maloney Creek on the Lower Salmon River. In summertime. When it was hot out and we were on an awesome river trip and you could be wearing shorts in the morning and feel like going swimming, as opposed to right now when I feel like stoking the woodstove. 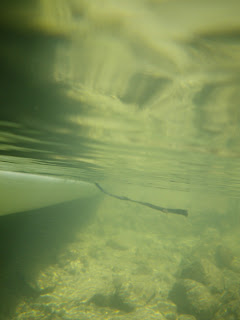