Fish whisperer Tom Farnam stopped by with a fishing update after a recent steelhead mission on the Grande Ronde and trout bonanza on the Wallowa.

The good news is that trout on the Wallowa are jumping out the of the water and rifling through your fly box right now to make suggestions on what to throw at them.

They can’t get enough. It’s an all-you-can-eat buffet mentality. They’re chomping anything with a hook. Not breaking any size records, mind you. Tom says the larger end of the scale were 14-inchers. But lots of catching. Lots of catching.

Early steelhead reports do involve successes, though it hasn’t really turned on quite yet. Thomas said there were plenty of rods on the water on the Washington stretch of the Grande Ronde from Boggan’s up to the stateline, but the bite was off as of a couple days ago . . . though the switch could be thrown any time now.

I just heard of a gal catching her first steelhead ever a few days ago on a float from Minam down to Troy. She accomplished this on a fly. I remember my first steelhead ever, also on a fly and also on the Grande Ronde. My face still hurts from all that smiling and that was years ago.

This guy Matt permanently broke his face bones from smiling after this Wallowa County steelhead. And his arms. He broke his arm bones from holding up that hog. 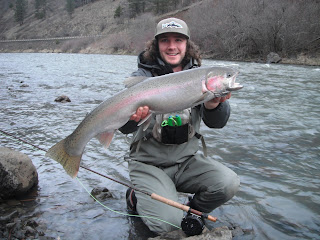 Perhaps you don’t know about the finest way to get into Grande Ronde steelhead. That would be a supported trip with Winding Waters. We set up camp. You fish your face off. We do the cooking, the setting up, the everything. You sip fine whiskey and regale everyone with your heroic fishing triumphs inside the comfort of a heated wall tent. Morgan fluffs your streamers at night so they’re primed for action first thing in the morning. Steelhead guide Tom is available to direct your casts where they’ll result in heroic tales. It’s the stuff of beer commercials. It’s what vacation time was made for. I daresay it’s what I’d do all year long if all year long was steelhead season.

You do it by clicking here for supported steelhead trip info.

As of Wednesday, October 3rd, the Grande Ronde was running at 611 cfs, up a wee bit from last week and the water temperature was in the 50s. Here’s the graph. 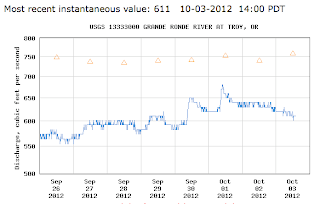 Halloween is traditionally go-time for steelheading on the GR. Renowned for takes on top.