Yoga and birthday candles on the Salmon 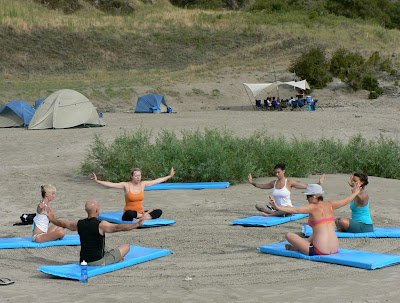 Raked sand. Rock stacks. Tea candles a-flickering atop rock stacks. Paco pads doing service as yoga mats and there you have it – a riverside yoga retreat along the Salmon River on a new white sandy beach each day.

Winding Waters had the pleasure of being there for a birthday cruise on the Salmon with ultra-entertaining Seattle bartenders and entourage. Thanks for getting that group together, Elizabeth. And happy birthday. Hurry up and get older so we can go back and do that trip again. This here photo shows birthday cheer radiating from a blazing pineapple upside-down cake. 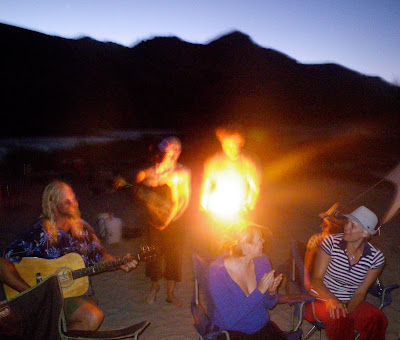 One novelty of this voyage was the romance novel purchased at a grocery store before departing on the trip – from which they read select passages each night after dinner. It was a pretty bad romance novel. Which implies there are good romance novels. I don’t know about that. But this one featured an alternate universe for one scene. Mm-hmm. An alternate universe. Oh, and lynxes. It had a lot of lynx references. But I will say it was pretty entertaining. 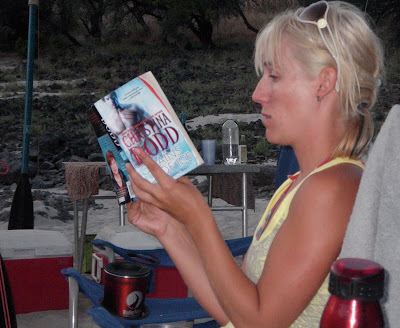 We had some exciting runs … the rapids are at a fun level for paddling kayaks and the third wave down in Lower Bunghole is especially attention-getting at this flow. I came in there with our new, little sporty Maravia and hoowee – not much for weight in my boat, which made for kind of an awesome episode where we squirreled around surfing for a few seconds, then popped a wheelie before going on our way.
Jason says he’s an adrenaline aficionado, and preferred that ride over roller coasters. Take that, Six Flags.

We had plenty of time, with a five day trip, so launched further upstream at Hammer Creek, rather than our usual put-in at Pine Bar. Adds ten miles, some interesting rapids and a cool pictograph site at Shorts Bar.

A few miles above Killer Goat Beach, aka Upper Packers Creek, saw a deer swim the river. We floated up as it was drinking, then boop, it hopped right in and crossed in front of us, swimming much faster than I would have imagined as there was a decent current running. Kind of impressive. 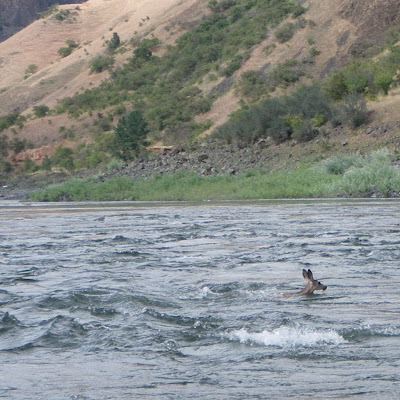 Morgan is out on the Salmon right now for a yoga trip with Jeff, Shannon and Todd – same crew I had for my yoga float last week….lots of yoga going on.

My next trip is with Fishtrap for Writing On the River with Annick Smith. Going to be a good one.

And here’s a baby update: I got to hold Linden yesterday. She’s still cute.