Yoga party on the Salmon

Heading out to float with friends I met last year on the river…that’s one of the things I like about this Winding Waters gig. I’m allegedly working, but in fact get to go rafting and meet folks that, goshdarnit, don’t seem like clients but more like pals.

And that’s the case with Elizabeth and her gang from Seattle. They do yoga on the beach. They read sappy romance novels out loud around the fire. They’re fun. And Paul and Todd and I are looking forward to 5 days of good times on the Salmon.

Here they are getting their yoga on in the sand last summer. Don’t that look inviting? 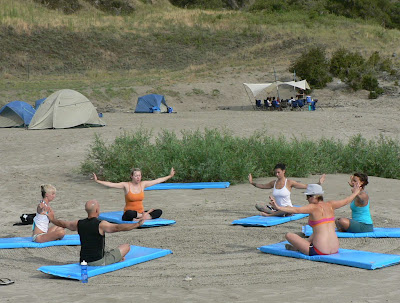 And here’s a skull on a stick at one of our camps last year. I don’t know what the deal was there. 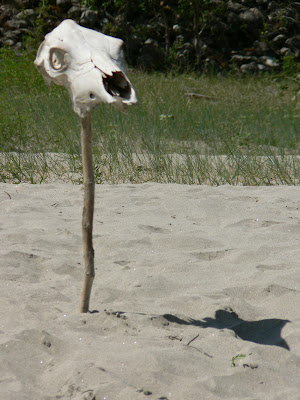 But part of rafting is work, and I’ve got to scoot right now to do some of that. Load boats, pack gear and whatnot. Then bound for a peaceful night at Pine Bar, which hopefully won’t be occupied by area residents who favor Pine Bar for drinking Cheladas around their trucks while boosting Lynard Skynard and Foreigner through their sound systems. Some awfully impressive stereo systems in that part of Idaho, I’m telling you.